Aller au contenu
Due to the Covid-19 epidemics, this workshop could not take place in residence, as originally intended.
RESEARCH SCHOOL – ECOLE DE RECHERCHE 2251
Geometry and Dynamics of Foliations – Géométrie et dynamiques des feuilletages
Dates: 18-30 May 2020

​MINI COURSES
Holomorphic Poisson Structures
Abstract. The notion of a Poisson manifold originated in mathematical physics, where it is used to describe the equations of motion of classical mechanical systems, but it is nowadays connected with many different parts of mathematics.  A key feature of any Poisson manifold is that it carries a canonical foliation by even-dimensional submanifolds, called its symplectic leaves.  They correspond physically to regions in phase space where the motion of a particle is trapped. I will give an introduction to Poisson manifolds in the context of complex analytic/algebraic geometry, with a particular focus on the geometry of the associated foliation.  Starting from basic definitions and constructions, we will see many examples, leading to some discussion of recent progress towards the classification of Poisson brackets on Fano manifolds of small dimension, such as projective space.
Fano Foliations
Abstract. In the last few decades, much progress has been made in birational algebraic geometry. The general viewpoint is that complex projective manifolds should be classified according to the behavior of their canonical class. As a result of the minimal model program (MMP), every complex projective manifold can be built up from 3 classes of (possibly singular) projective varieties, namely,  varieties $X$ for which  $K_X$ satisfies $K_X<0$, $K_X\equiv 0$ or $K_X>0$. Projective manifolds $X$ whose anti-canonical class $-K_X$ is ample are called Fano manifolds.
Techniques from the MMP have been successfully applied to the study of global properties of holomorphic foliations. This led, for instance, to Brunella’s birational classification of foliations on surfaces, in which the canonical class of the foliation plays a key role. In recent years, much progress has been made in higher dimensions. In particular, there is a well developed theory of Fano foliations, i.e., holomorphic foliations $F$ on complex projective varieties with ample anti-canonical class  $-K_F$.
This mini-course is devoted to reviewing some aspects of the theory of Fano Foliations, with a special emphasis on Fano foliations of large index. We start by proving a fundamental algebraicity property of Fano foliations, as an application of Bost’s criterion of algebraicity for formal schemes. We then introduce and explore the concept of log leaves. These tools are then put together to address the problem of classifying Fano foliations of large index.
Minimal Model Program
Abstract
The goal of the Minimal Model Program (MMP) is to provide a framework in which the classification of varieties or foliations can take place. The basic strategy is to use surgery operations to decompose a variety or foliation into « building block” type
objects (Fano, Calabi-Yau, or canonically polarized objects). We first review the basic notions of the MMP in the case of varieties.  We then explain work on realizing the MMP for foliations on threefolds (both in the case of codimension =1 and dimension =1 foliations). We explain and pay special attention to results such as the Cone and Contraction theorem, the Flip theorem and a version of the Basepoint free theorem.
Complete Holomorphic Vector Fields and their Singular Points
Abstract. On a complex manifold, complex flows induce complete holomorphic vector fields. However, only very seldomly a vector field integrates into a flow. In general, it is difficult to say whether a holomorphic vector field on a non-compact manifold is complete or not (vector fields on compact manifolds are always complete). Some twenty-five years ago, Rebelo realized an exploited the fact that there are local (and not just global!) obstructions for a vector field to be complete. This opened the door for a local study of complete holomorphic vector fields on complex manifolds. In this series of talks we will explore some of these results.What I will talk about is for the greater part contained or summarized in the articles in the bibliography. Their introductions might be useful as a first reading on the subject.
Codimension one foliation with pseudo-effective conormal bundle

Abstract. Let X be a projective manifold equipped with a codimension 1 (maybe singular) distribution whose conormal sheaf is assumed to be pseudoeffective. Basic examples of such distributions are provided by the kernel of a holomorphic one form, necessarily closed when the ambient is projective. More generally, due to a theorem of Jean-Pierre Demailly,   a distribution with conormal sheaf pseudoeffective is actually integrable and thus defines a codimension 1 holomorphic foliation F. In this series of lectures,  we would aim at describing the structure of such a foliation, especially in the non abundant case, i.e when F cannot be defined by a  holomorphic one form (even passing through a finite cover).  It turns out that \F is the pull-back of one of the « canonical foliations »  on a Hilbert modular variety. This result remains valid for ‘logarithmic foliated pairs’.
TALKS & DISCUSSION SESSIONS
Dynamics and topology of the Jouanolou foliation
Higher Ramanujan Foliations
On symmetries of transversely projective foliations
A model-theoretic analysis of geodesic equations in negative curvature.
Topics on the Poisson varieties of dimension at least four
Boundedness of Minimal Partial du Val Resolutions of Canonical Surface Foliations
Regular foliations on rationally connected manifolds
Foliations and MMP: some applications
Hyperkähler structures on symplectic realizations of holomorphic Poisson surfaces 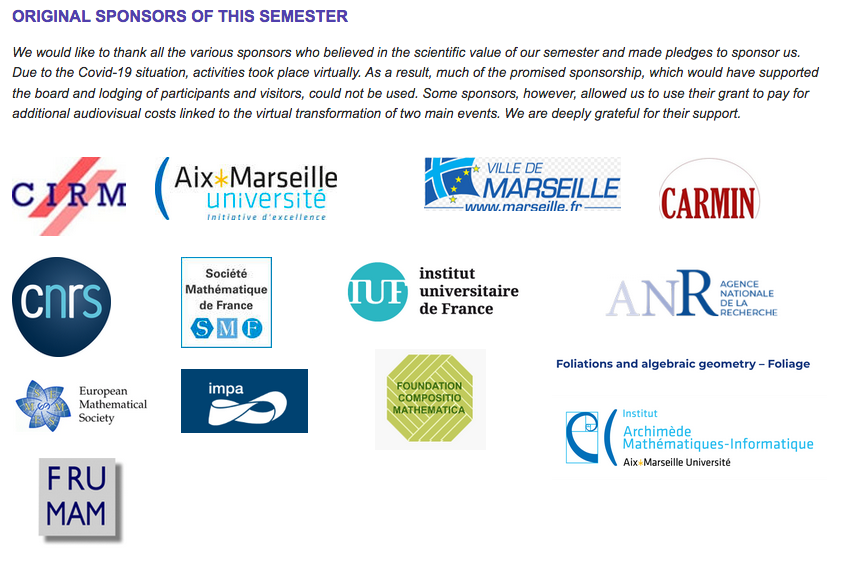